When we look into the night sky, one star shines paramount above all others. By moving towards us, Sirius creates an axis of rotation with Earth relative to the heavens. Because of this, the heliacal rising of Sirius matches the length of our solar year. Like clockwork it rises on July 25 annually, which was celebrated as the new year in ancient Egypt. Indeed, it was the first day that Sirius appeared from behind our sun; it remains the synchronous day when the Earth, Sun and Sirius are in a straight line across space.

We know that the sun behind our sun appears in our sky as a dominant star called Osiris next to a smaller companion star called Isis. But there is actually a third subtle body in the system—Nephthys.

The Lady of the Temple (Nephthys) is a “neutron star” with a diameter of about 22 kilometres. Once the core of the star has completely burned to iron, energy production stops and the core rapidly collapses, squeezing electrons and protons together to form neutrons and neutrinos. As the star moves away from the main sequence, subsequent nuclear burning produces an iron-rich core.

The Throne Goddess (Isis) the “white dwarf” is intensely hot and heavy. Spinning on her axis about 23 times a minute, she generates huge magnetic storms which create disruptions between all three. Her circumference is 36,700 kilometres. She and Osiris orbit the barycenter every 50 years. Despite being smaller than Earth, Isis is almost as dense as our Sun.

The Lord of Love (Osiris) is the blue “main sequence” star. Compared with our Sun he is almost twice the size, much hotter and 22 times brighter. Because of his brightness he is visible from Earth with a circumference of nearly 7,477,000 kilometres. The triquetra or vesicae piscis describes the Sirius system. There is a key subtlety here: while Sirius is a binary light system it remains a trinary sound system. 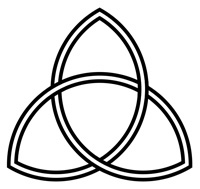 Below is an image of Nephthys, Osiris and Isis: 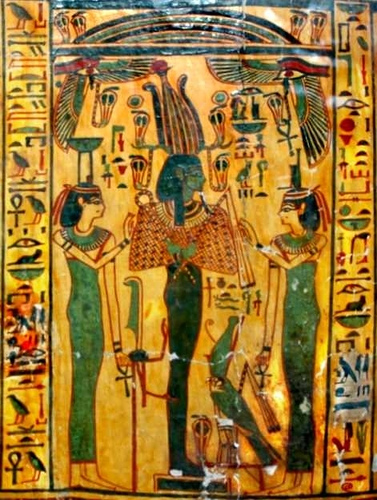 Above: Nephthys and Isis reveal their connection to Set and Horus

Notice the green colour scheme which is a reflection of the heart chakra (lotus) but also the infrasonic wavelength of suns. Nephthys and Isis hold their hands up to Osiris’s resonance. The twin suns are portrayed as female because they are both collapsing solar bodies: the changing polarity of stars was shown as a male to female shift in this culture. Osiris faces away from Nephthys because she is a neutron star, secret and hidden. Nephthys holds her ankh to Set whose binary orbit with Horus is governed by Osiris. Opposite, Isis holds her ankh to Horus’s chimes—a reference to our “singing suns” and the maternal connection between these two deities.

When we look at Nephthys and Isis below, the geometries above their heads give us a clue to their stellar characteristics—one sun is of the darkness, the other is of the light: 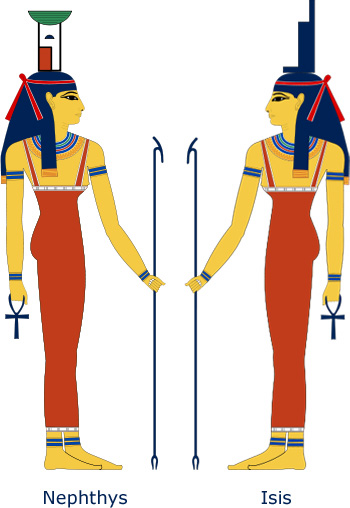 So Nephthys is the dark “nursing-mother” and Isis is the bright “birth-mother” of our Sun, Horus. Horus is a creative god with the head of a Peregrine Falcon. Set is a destructive god with the head of a Saluki. Notice the statue below featuring Horus, Ramesses III and Set. Ramesses stands at right angles to the other two with his arms firmly down and fists clenched like a fulcrum. The position of the king between the dual gods, receiving blessings from both, symbolizes his union of their opposing natures within himself. But something deeper is going on here: please click here if you noticed the angle of the left and right elbows of Horus and Set. 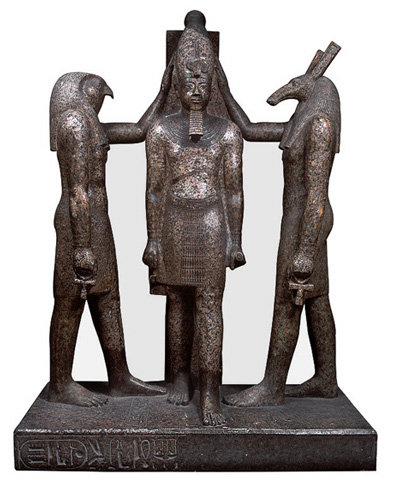 Above: our solar system also has a neutron star called Set

Indeed, the statue above hints at a great secret: our sun Horus has a dark uncle called Set. Horus and Set are gravitationally bound to each other and have a binary orbital dance that brings them close cosmologically. So in our solar system we have a main sequence star and a neutron star. In other words, while we appear to live in a single light system, we really live in a binary sound system.

The myth of Osiris describes how the light of Sirius once rained down into the Nile creating the highest shamanic culture the world had ever seen. It was a time of peace and prosperity where art and mathematics reached heavenly heights. Over time however the Nile came out of line with Sirius and the unborn star Set moved through the heavens to obscure the light and perpetrate great destruction on Earth. The “cutting into pieces” of Osiris is a reference to the fragmentation of the high culture that happened during that time before the rebirth of the First Dynasty.

Here we can introduce the mythological story of The Contendings of Horus and Set that deals with the battles between these gods over the succession to Osiris’s throne. These colourful skirmishes between the falcon and the greyhound often occurred before a sacred flower. You may recall that the lotus has particular significance when we discuss the orbital dance of Earth and Venus (click here to check it out).

Using the cosmic law of as above, so below we can then conclude that life in the cosmos is a reflection of the lotus pattern described by the fulcrum of binary stars. Applying this rule to the Horus/Set dance we can infer that these deities have the same phase-locked Fibonacci orbits of Earth and Venus. If Horus’s orbit around Osiris takes 1,461 years then Set’s smaller orbit takes 903 years. We then want to acknowledge the conjunction of Horus, Set and Sirius we can work out that it happens every 11,688 Earth years based on the Fibonacci 8:13 ratio.

So when we look to the morning sky on the heliacal rising of Sirius, Set is visible every 11,688 years. Enlightenment is predicated on the understanding of both deities: royalty of the fourth dynasty were among the first to witness Horus, Set and Osiris in the sky together. As evidence of this, the phrase She who sees Horus and Set was used as a royal title by several queens in this golden age:

Above: Meresankh beholds Set and Horus

For those star gazers wishing to find Set then the easiest way is to recreate this pattern here using astronomy software. By replacing the protagonists with Horus, Set and Osiris and using the fourth dynasty as a start date, Set’s path can be plotted using our perennial lotus pattern.

Indeed, this description provides a timeframe for this conjunction at about 2,500 BCE which was a time of great peace and prosperity. In a more explicit reference below, the entrance to the temple of Ptah was flanked by the plant emblems of both—only through their cooperative efforts was stability maintained. Horus and Set are seen tying the papyrus and lotus around the sema. The sema hieroglyph represents two lungs attached to the trachea—an anatomical unit that is a symbol of the unification of equal parts. Here you may sense the proximity of the terms anatomical with astronomical when you compare the curve of the stems below with the clip of Earth and Venus above. 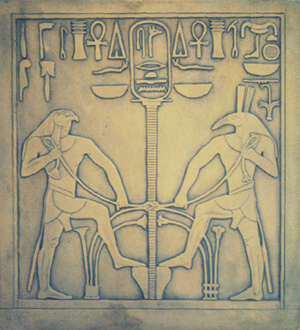 Above: balance leads to enlightenment

In fact Horus’s angular momentum, the difference between the sidereal/solar year and the changing rate of precession all hint at our binary system: the only way the Earth’s axis can appear to precess relative to inertial space is if our solar system is curving through the cosmos. It can only do this at a rate of 50 arc seconds per year if it is gravitationally affected by another large mass: a neutron star.

So while Set was seen as a destructive god the subtlety here refers to the regenerative aspect of ruin—the death of the old simply heralds the arrival of the new. So this immortal fulcrum between Set and Horus traces out the sacred lotus and hints at eternal change in the universe. This is known as the alchemical wedding of Horus and Set: the union of our exoteric and esoteric natures.

Click here to see what the lotus and spacetime have in common.